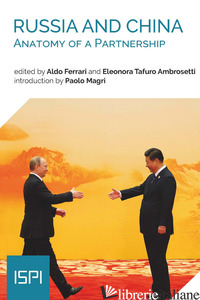 RUSSIA AND CHINA. ANATOMY OF A PARTNERSHIP

<DescrizioneEstesa>While the "decline of the West" is now almost taken for granted, China's impressive economic performance and the political influence of an assertive Russia in the international arena are combining to make Eurasia a key hub of political and economic power. That, certainly, is the story which Beijing and Moscow have been telling for years. Are the times ripe for a "Eurasian world order"? What exactly does the supposed Sino-Russian challenge to the liberal world entail? Are the two countries' worsening clashes with the West drawing them closer together? This ISPI Report tackles every aspect of the apparently solidifying alliance between Moscow and Beijing, but also points out its growing asymmetries. It also recommends some policies that could help the EU to deal with this "Eurasian shift", a long-term and multi-faceted power readjustment that may lead to the end of the world as we have known it.